I have never written fiction before, though I have written lots of essays and some poetry, plus professional research articles. But I have always wanted to try. So I am going to jump out of the airplane–and see where the story takes me. The difference is, this will be a kind of performance art, because … END_OF_DOCUMENT_TOKEN_TO_BE_REPLACED

Part of an ongoing serial story Niko followed silently behind Mrs. Stone, but his mind was agitated. He turned over her few words in his mind, much like a jackdaw would look for jewels among pebbles. What did she mean by saying only a fortunate few are welcomed here? Hadn’t he decided on his own … END_OF_DOCUMENT_TOKEN_TO_BE_REPLACED

Not A Simple Question

I have come to a conclusion. Perhaps if I had thought about it more carefully at first I would not be surprised. But it has only recently occurred to me that a great deal of the disturbance about evolution—yes, no, theistic, atheistic, guided, unguided, young earth, old earth, Darwinist , near- neutralist, whatever! is about … END_OF_DOCUMENT_TOKEN_TO_BE_REPLACED

Part of an ongoing serial story There once was an old woman with a magical house. Every now and again the house would grow a new room, and the old woman would know it was time to expect guests. She never knew who would come, or when, just that some day there would be someone … END_OF_DOCUMENT_TOKEN_TO_BE_REPLACED

Why is the world a beautiful place and why does it touch me? When I was 16, my parents gave me a horse. I was a fairly typical teenager— alienated, self-absorbed, and without a way to ground my understanding of the world. I had received a certain worldview from my parents, but it was incomplete … END_OF_DOCUMENT_TOKEN_TO_BE_REPLACED

The Mystery of Energy Metabolism

Biologists argue about which came first, metabolism or replication, or in other words, enzymes or DNA. Other biologists try to square the circle by saying, “We can have both at the same time with RNA.” But there is something missing from all three scenarios, without which they won’t get far. Both metabolism and replication require a means to store and transfer energy.

Modern day cells use a molecule called ATP for this process: adenosine triphosphate. It is related structurally to one of DNA’s building blocks: adenine. Compare their structures. Adenine is a base (double ring structure in orange). Add a sugar to it and it becomes adenosine. Add a phosphate to that and you have a nucleotide. Add two more phosphates, and you have ATP. Adenosine triphosphate.

Ho hum you say. What is so interesting about that?

Think of in this way. You have a computer system that stores its information in codes of four instead of two. Not 0s and 1s, but As, Cs, Ts, and Gs. Adenine is the A. One part of the code. Now imagine you take your computer hardware that does the encoding for A, whatever it is, stick a sticky bit on it, and a rechargeable battery, and suddenly you can light campfires and suck the power from light bulbs.

END_OF_DOCUMENT_TOKEN_TO_BE_REPLACED

Love’s Reply: Written in response to a piece that has long since morphed into something else, all the remains is the sequence of repentance and joy. All written and recorded in Finale.

It might seem odd to introduce a poem by pointing toward a blog on philosophy, but when the poem and the blog are read the connection will be clear.

I deal in controversy, in discourse that is sometimes freighted with more than disagreement. So I wrote the poem on this page 40 years ago while a graduate student, based on a sharp disagreement I had with a friend. She believed one thing and I believed another, and the two could not both be true.

It seems now that my life deals in this situation even more, only the rhetoric and emotions are are stronger, more caustic even.

How are we to deal with this conflict?

What does epistemology have to say about solving disputes?

“As can be seen, there is no single correct response or strategy to take toward actual cases of disagreement. The unsurprising irony is that the epistemology of disagreement has managed to give rise to a whole new set of disagreements.”

And then, after discussing religious disputes, the articles comes to this conclusion:

“disagreement must be dealt with in the ordinary way: I’ll state reasons, provide arguments and pinpoint evidence, and you’ll do the same.” 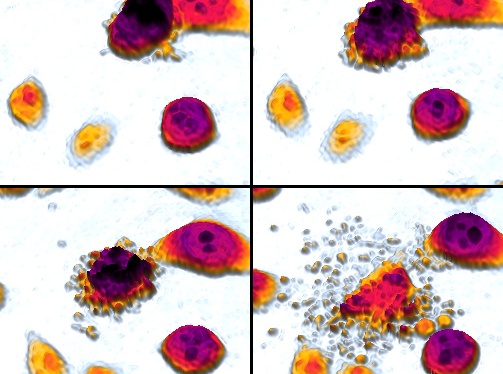 We naturally think of death as something awful, a scourge to be dreaded and put off for as long as possible. But biological death has its positive side. Think of self-sacrifice—death for the good of others. That kind of death we think of as altruistic, even noble, attributing it to heroes or saints. And most of us don’t realize that such self-sacrifice is written into our bodies, at the deepest levels of our being.

The process is called apoptosis, in which cells kill themselves from within. It is not death due to overwhelming damage—that’s another process and called by another name. Rather it is a programmed process whereby cells self-destruct. They shred their DNA, internal organelles (specialized parts of cells) condense, and membranes bleb (blister). Then scavenger cells come by and clean up the remnants for recycling.

END_OF_DOCUMENT_TOKEN_TO_BE_REPLACED

Picture a hidden city, that though it cannot be seen, is everywhere. Sound crazy? It’s real. And it is the most antic, madcap, crowded yet fantastically efficient city you could ever picture. It’s like Hong Kong sped up to an almost unimaginably manic pace, with all kinds of independent, apparently purposeful activities going on — fast, fast, fast! — conducted by a huge cast of actors (enzymes and other intricately sophisticated molecular machines made of proteins) that go about their business as if it were their business. There, I gave it away. This mysterious city I write about is a microscopic cell, made of DNA, RNA, proteins, and membrane. No doubt you were taught to think of a cell more or less statically, but it is a highly dynamic ever changing entity. How is all this activity coordinated and directed? The answer remains largely mysterious, and the more we find out the more the mystery grows.

We do know this much. The nucleus is where DNA, the cell’s information storage system, resides. It serves as the cell’s Grand Central Library, where a good deal of the coordination takes place. DNA, the chief orchestrator, looks like a tangled mess, but it isn’t, it’s quite organized. It has to be. Supercoiled DNA packs tightly against the nuclear wall, inactive. Nearer the center, active chromosomes stake out territories, so that in the center, their unwound loops of DNA can partner with others in an intricate dance. Clouds of signal molecules surround these loops, looking for binding sites near genes. Most genes have multiple binding sites near them. When occupied, the binding sites send signals— yes, no, no, yes, yes   — that get integrated into one overall signal. When it adds up to yes! a cascade of events begins — another kind of binding protein sits down on the DNA like a rider in a saddle, right in front of the gene, and attracts other proteins to itself, one by one. Then the cluster attracts a wandering machine called an RNA polymerase, which will copy (transcribe) the DNA into RNA. The whole complex waits like a race horse in the starting gate until the signal is given, then bang! the polymerase whizzes off, transcribing DNA into RNA at an astonishing clip of 30 nucleotides per second.

You are probably wondering what the RNA is good for.  It gets processed and shipped out to the cytoplasm, where it is turned into proteins like the polymerase and binding proteins, or the thousands of other proteins the cell requires. Proteins are the actors that accomplish things in the cell, and the building blocks from which things are made. You will meet other examples as we go.

END_OF_DOCUMENT_TOKEN_TO_BE_REPLACED

Follow Making Note of the Moments on WordPress.com
Scroll to Top